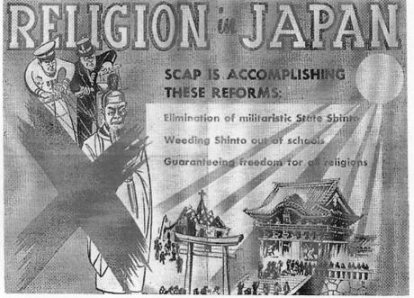 State Shinto is a term that refers to the use of Shinto traditions and beliefs to support Japanese nationalism in the late 19th century and early 20th century. This form of religious nationalism is often associated with what is called the Meiji Restoration, which began in 1867 when samurai rule in Japan was defeated and the Emperor was restored.

During this period, for various political, economic and social reasons, certain parts of Japanese society were deemed "foreign" or "dangerous" to the society at large. Thus, Buddhism, Christianity and other religious and cultural groups were disenfranchised and even persecuted in an effort to purge Japan from their influences.

Within this mindset, it was determined that Shinto was the most authentically Japanese form of religion and culture, and that it was fundamental to Japanese identity at the national level. Shinto became the state religion, and was used to promote a distinct ideology of Japanese superiority. Passages from Shinto mythology were appropriated to support the Emperor's divine status via his direct lineage back to Amaterasu, the racial superiority of the Japanese people and the general superiority of their land because of their divine origins. Moreover, these supremacist ideologies were taught in school curricula and in public civic life.

Japanese nationalism continued into the 1930's and 1940's where it culminated in World War II. State Shinto was disbanded after Allied powers won the war, defeating Japan, and the Americans occupied Japan. Emperor Hirohito in 1946 renounced this political, ideological interpretation of Shinto in a public radio address to the nation. That address is called the "Declaration of Humanity" and in it the Emperor denounced his own divinity as well as the racial superiority of Japanese people.