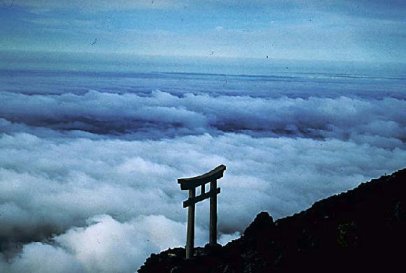 Shinto is the "way of the gods" - and Shinto gods and goddesses are called kami.

The term kami refers to anything that is above, high, special, unusual or auspicious in any way. It refers to the essence, or internal quality, of many phenomena that Shinto believers consider an aura of divinity. These phenomena include rocks, trees, rivers, animals, places and people. All of these can contain the nature of the kami. Also in the category of kami are things that inspire a sense of wonder or awe in the beholder in a way that testifies to its special nature or the divinity of its origin.

In other words, many things in the world possess an "ultimate" sense about them - as if they are connected to or reflective of "the ultimate" or the divine. This sense is what is called the kami.


There are basically 3 categories or types of kami:

- family ancestors - deceased ancestors whose essence lives on in the family as a revered and honored presence - this is especially true of families with aristocratic lineages (rulers, emperors, etc.), whose ancestors will be honored by the general population, not just the blood relatives

- souls of the auspicious dead - especially soldiers and other war dead - these are revered for their bravery, commitment and service - many of the most prominent Shinto shrines in Japan are devoted to the worship of the kami of the war dead 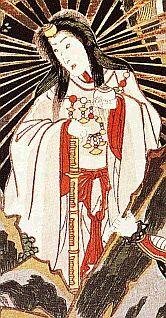 Amaterasu is arguably the most prominent and famous of the Shinto gods or kami. Stories about her and other prominent gods and goddesses are chronicled in two of the major sacred texts - the Kojiki (Records of Ancient Matters) and the Nihongi (Chronicles of Japan) - neither of which were collected into written form until the 8th century. According to the mythologies contained in these texts, Amaterasu is the Sun Goddess who was born from the left eye socket of a male creator kami named Izanagi.

Izanagi and his female companion Izanami are the original two kami. They joined together in union to create the entire cosmos, particularly the islands of Japan. Izinami died giving birth to the fire kami. Izinagi underwent a purification ritual after his mate's death; during that ritual, Amaterasu was born from his eye socket.

Amaterasu is, of all Shinto gods, most identified with Japan itself, which is known as the "Land of the Rising Sun." Amaterasu's image - the sun - appears on the Japanese national flag. The mythologies in Shinto describe her as the divine ancestor of the Emperor of Japan's lineage. They say she sent her grandson, Ninigi, from heaven to rule Japan. Ninigi's great grandson, Jimmu, is a quasi-historical figure who is described in the Shinto tradition as being the first emperor of Japan in the 7th century C.E. 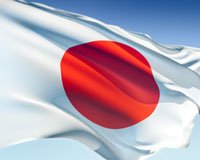 So, Amaterasu is both a nature kami as well as a highly auspicious ancestor kami. The Ise Shrine in Japan is the site of her veneration.