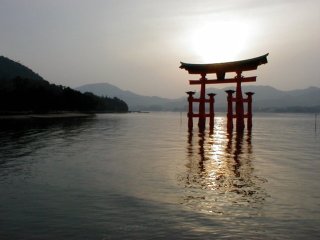 The origin of the word "shinto" means "way of the kami." Therefore, Shinto beliefs focus on the existence and power of the kami, or gods, that exist in the world, in nature, and especially in and throughout Japan. Click the "kami page" below to learn more specific information about these gods.

In general, however, this religion is an overall perspective more than a simple list of Shinto beliefs. This perspective - referred to by the phrase mono no aware - is a uniquely Japanese way of seeing the world and its beauty that contains many nuances, which includes:

- aesthetic sensitivity - a sense of beauty and of the beautiful

- sensitivity toward the aesthetic and the emotional as a basis for looking at life - this includes the sadness or pathos of life as well as joy, happiness and bliss


These sensibilities undergird much of what is focused on in Japanese thought and artistic expression - things such as nature, harmony, balance - and their particular expression in practical and decorative arts such as flower arranging, architecture, landscape design, the tea ceremony and elsewhere.

Shinto beliefs, then, are not centered around official creeds or codified systems of theology or ethics, but instead are a distinct sensibility that underlies an entire approach to life and the world. This can be captured not only with the phrase mono no aware, but also with the concepts of makoto and kannagara-no-michi.

Makoto simply means "sincerity" and it is the basis of Shinto ethics. This religion is sometimes criticized by those who don't understand it for having no official list of rules or codes of ethics, such as the Ten Commandments. Instead, Shinto emphasizes makoto - sincerity in the heart.


Those who are sincere will naturally tend to behave in ways that cohere with the great, official ethical traditions of the world's religion. Sincere people don't steal from others, or lie to them, or try to murder them. Sincere people do not do things that undermine the fabric of society or bring harm to the community or family. Sincerity is the grounding of all ethical thought and behavior, in this view. Even were the religion to have long lists of dos and don'ts in its archives, only those with sincerity in their hearts will be prompted to live the rules.

This is partly what is meant by the phrase kannagara-no-michi which, in the ethical context, refers to the idea that virtue is inseparable from the rest of life, especially life lived in harmony with the natural world (enlivened by kami, or the gods). Beauty, truth, goodness, morality - these are all connected, inseparable from each other. Those who live life with the perspective outlined above - with an aesthetic sensitivity, an emotional sensibility toward the world, and with a sincere heart will behave morally almost naturally. List and rules are more important for training animals than for cultivating morality in humans, according to this view.

Having said this, purity rituals are common across Shinto practice, which points to the need for purity in one's heart. This purity of heart is a natural companion to makoto. Purity rituals use water as the cleansing agent, and the rituals include rinsing the mouth, washing the hands, bathing, standing under waterfalls, and other such things. Often, these activities are done at a shrine, and they symbolize the inner purity necessary for a truly human and spiritual life.