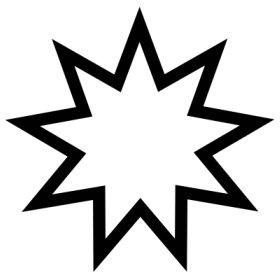 The Bahai faith is the youngest of the "world religions" according to many scholars, being only about 150 years old. It is a monotheistic religion that originated in Persia (Iran) within the Shi'ite Muslim context, and has between 6 and 10 million adherents. Accurate data is hard to obtain; even when religious identification is asked for on many surveys, a check-box for this religion often is not included. Additionally, its adherents are heavily persecuted in some parts of the world, so they keep their identity hidden to some extent.

Bahais live in all major parts of the world. Africa and Asia have nearly 5 million between them, and Bahais lives in significant numbers also in Europe, Latin America, North America and Oceania. (Approximately 100,000 live in the United States.)

The scope of its geographic presence and its institutional stability are partly what prompts scholars to begin to label this religion a "world religion." Both of these were deliberately initiated at different times by leaders in the Bahai faith.

Click the pages below to learn more about this expansion and about the beliefs of the religion in general.