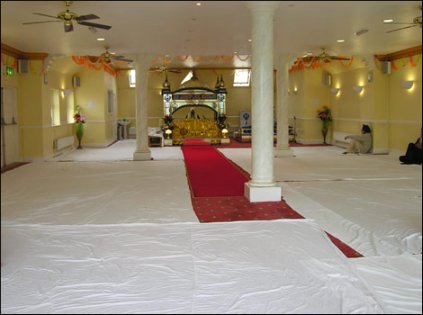 Sikh religion focuses on the oneness of God and the need for people to be devoted to God and to develop God consciousness. In many ways, the Sikh religion offers a simple monotheistic message of devotion, ethical living, and service to others.

Nanak taught that the basic human condition is one of being plagued by delusion. He used the term maya for this, which is a Hindu and Buddhist term, but Nanak interprets it in a specific way. For him, life in maya means that we are deluded. We mistake the world for something it is not; we think it is separate from God when it isn't. We think that impermanent things are worth pursuing - like wealth, beauty, fame, etc. - when they are not. But, as we pursue these things, we become attached to maya and we are doomed to the cycle of rebirth. So, here Sikhism retains the Hindu notion of karma and rebirth.

Manmukh is the term the Sikh religion uses for an unregenerate person who is living in this human state of ignorance, self-centeredness and in pursuit of illusory goals. Such a person is plagued by the 5 evils of: lust, covetousness, anger, pride and worldly attachments.

The goal in Sikh religion is to become gurmukh or a regenerate person - someone who is God-centered and God-filled. Such a person is liberated from the cycle of life, death and rebirth. Instead of being plagued by the 5 evils, this person's life demonstrates the 5 virtues of: truth, contentment, compassion, patience, and dharma (humble service to God and others).

Mukti is the term for spiritual liberation - release from the round of death and rebirth, and attainment of union with God both in this life, at death and in the afterlife. Indeed, the goal is to live a life of spiritual liberation while still in the world. This term for this is jivan mukti or "liberated in the body" - that is, still living in the world, in one's body, in one's life, but living in a spiritually liberated and awakened way.

Here, Nanak is in conversation with the 4 stages of life in Hinduism. In Hinduism, there are 4 stages that culminate at the end of life when people put aside all other worldly cares in order to focus on spiritual pursuits. Nanak, on the contrary, says that spiritual pursuits should be primary throughout one's life, as one is a youth, an adult with a family and business to run, an older person with grandchildren, and so on. Nanak collapses all 4 of the Hindu stages into one, which is conducted in everyday life. One doesn't need to leave life and go into the forest to become a sage or hermit in order to attain spiritual liberation.

In general, Sikh religion is focused on the interiority of religion rather than outward observances in ritual and other formulaic practices. That being said, there are some common practices in Sikhism. Most practicing Sikhs will conduct morning devotionals in the home with the family, which includes some sort of bathing or ritual washing as well as singing, praying and reading through the opening hymn of the Adi Granth (the sacred text). This opening hymn is called the "Japji" and it affirms the oneness of God, the lack of division within God, and the need for all to be devoted to God and to keep their hearts clean.

The langar, or communal meal, is a common practice as well. Most Sikh communities host weekly communal meals, which are generally open to everyone, not only Sikhs. The langars usually occur in the gurdwara, or Sikh meeting place.

Other rituals involve reading the Adi Granth in its entirety in one setting, which usually takes about 2 days. At a death, as part of a 10-day mourning period, the text is read aloud in its entirety.

Highly observant Sikhs also practice the 5 tenets of the khalsa.