The most sacred place in Sikhism in the Golden Temple at Amritsar in the Punjab region of northern India. It is one of the most beautiful sacred spaces in the world and people visit it from all over the world. 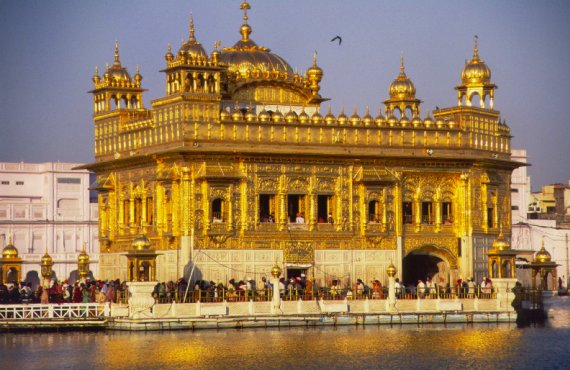 The Golden Temple is the name popularly used for the temple; however, Sikhs call it the "Harmindir Sahib" or the "Darbar Sahib" which means "temple of God" or "court of God" respectively. It was constructed in the 16th century during the leadership of the 5th guru - Guru Arjan.

Unlike many temples, the central activity inside this temple is not sacrifice or any kind of ritual toward God. Instead, the central focus is on the reading of the Adi Granth, the Sikh sacred text - which is the central focus in any Sikh community center or gurdwara anywhere in the world.

Also, unlike many Hindu temples built during the same period, this Sikh temple is located on relatively low ground (as opposed to a hilltop) and is open on all four sides (as opposed to only having one entrance). The Sikh tradition holds that the four openings symbolize the four traditional castes in India, and that all people are welcome. Sikhism rejects any kind of discrimination based on caste, gender or position in society.

To enter the temple, men and women both must cover their heads with a turban or scarf, and they must remove their shoes.

The most infamous event in modern times involving this Sikh temple occurred in 1984 when India's Prime Minister ordered an attack on the temple after it had been taken over by militant separatists who called for an independent Sikh homeland. Later that year she was assassinated by two of her Sikh bodyguards.