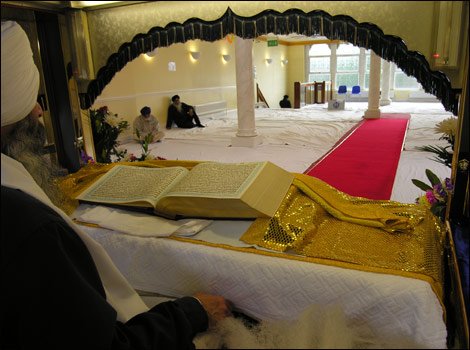 The Guru Granth Sahib is another name for the Adi Granth, the primary sacred text of Sikhism. It is called Guru Granth because the text is considered to be the "living guru" for the worldwide Sikh community. Hence, the reading, chanting and study of the text is a central practice throughout the Sikh religion.

The Adi Granth was compiled in the 16th century under the leadership of the 5th guru, Guru Arjan. He began the project in 1603 and completed it one year later. The text includes:

- hymns and teachings of the first 5 gurus of Sikhism, including those of the founder Nanak

- some writings of Kabir, a poet of the Sant movement, which was a devotional movement described elsewhere in this section that was influential in the formation of Guru Nanak's spiritual perspective

- the writings of 20 selected Hindu and Muslims saints/mystics who affirmed the oneness of God and were deemed to know and practice true spirituality.

Overall, the text includes over 6000 hymns, one-third of which were composed by Arjan himself. The text is organized into 31 sections with hymns in each section. The hymns are arranged in chronological order according to their authors among the 5 gurus. After the hymns of the Sikh gurus comes the additional hymns written by Kabir and other Hindu and Muslim saints.

The Adi Granth (or Guru Granth Sahib) is treated in much the same way as a living guru would be treated in Sikh worship. The text is brought in and out of the worship space via a ceremonial procession. It is draped in special materials and held on a special stand. It is often fanned with feathers as it is being read, in just the same way a living guru might be fanned while giving a teaching or lecture.

People bow to the text and back away from it instead of turning their backs on it, as a sign of respect. The text is the central "figure" at weddings, birthdays and other special events, just as a living guru would be an honored guest.

Many Sikhs have a special place in their homes for their copy of the Adi Granth and treat it with the same honor and respect as it receives in the Golden Temple at Amritsar and in gurdwaras throughout the world.