The term "khalsa" means "pure" and refers to the Sikh community of soldier/saints that was initiated by the 10th guru, Guru Gobind Singh. The context for its formation was the late 17th century India under a Mughul emperor who reimposed many oppressive restrictions on non-Muslims that had been allowed to lapse during the reign of a previous emperor. Sikhs, like other non-Muslims, suffered under these restrictions. Guru Gobind Singh, in response, on the day of the Hindu New Year in 1699, called on Sikhs to become part of a new brotherhood which would seek to establish righteousness and justice in both spiritual and political terms.

Initially, the khalsa operated in a military fashion, and members fought in battles, were captured, tortured and executed, including Gobind Singh's own sons. Fighting continued between the Sikhs and the Muslim rulers throughout much of the 1700's until finally the Sikhs were able to establish their own nation in the early 1800's. This lasted only a short time, however, due to infighting among the Sikhs.

Since its beginning, the khalsa has undergone changes and division within it. Many Sikhs do not belong to it, nor do they wear its markings as they are listed below. Even among those who join it, there are divisions between those who take a more traditionalist or a more innovative approach to religious life and practice.

Also, they differ among themselves as to the political and military responsibilities of the community. For example, should khalsa members fight, militarily if necessary, for a renewed Sikh nation distinct from Hindu India or Muslim Pakistan? Or should they work within the existing political structures for basic rights, justices and equality? These are some of the major issues within the Sikhism today. 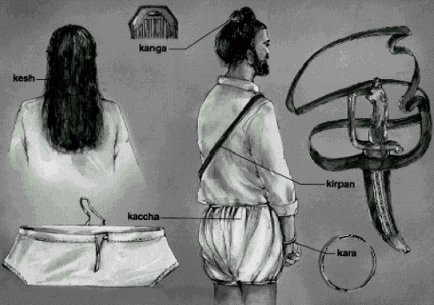 In general, Sikhs initiated into the khalsa demonstrate 5 markers that signify their identity (seen in the above image). These are sometimes called the 5 K's:

- kesh - uncut hair - men and women grow their hair long, and men do not cut their facial hair

- kirpin - a sword or knife - depending on the country, this can be a full-sized sword worn on the belt, or a small trinket or emblem of a sword worn on a necklace or carried in one's pocket - carried by both men and women

Because of these features, Sikh men and women who are members are readily identifiable in public - especially men who wear a turban and a bracelet.