Sikh gurus were responsible for the leadership of the Sikh religion and community for the first 200 years or so of its existence. Nanak (the founder) was the first guru, and he chose one of his followers to be the guru who succeeded him. After that, the guru succession happened along mostly hereditary lines. The "Ten Gurus" are the most common image or pictorial representation in the Sikh religion. 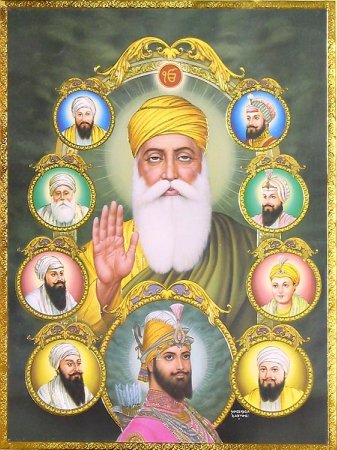 Each of the ten Sikh gurus accomplished important things for the Sikh community. However, other than Nanak, two of the gurus are especially important because of their achievements.

Guru Arjan (1563-1606) - or Guru Arjan Dev - was the fifth guru. During his leadership, the construction of the Sikh temple at Amritsar in northern India was begun and completed. The temple is commonly called "The Golden Temple" but its more specific name is "Darbar Sahib" (God's court) or "Harimandir Sahib" (temple of God). The Golden Temple is one of the most striking and beautiful sacred spaces in the world. For more information about it, click the link below.

Guru Arjan also oversaw the compilation of the materials that eventually became the Adi Granth, the primary sacred text of Sikhism. The Adi Granth includes hymns and teachings of the Sikh founder Nanak, the writings of the successive gurus after Nanak, the writing of Kabir (a poet of the Sant movement described elsewhere in this section), and the writings of other non-Sikhs (Hindus, Muslims and others) who were deemed to know and practice true spirituality. Guru Arjan oversaw the collection and compilation of all these materials, and then enshrined the entire text as the Adi Granth in the temple at Amritsar. Guru Arjan, like several of the Sikh gurus, was tortured as executed by the Mughul ruler of the time.

Gobind Singh (1666-1708) was the 10th guru and holds a special place for two main reasons. First, he is the author of a secondary text in Sikhism called the Dasam Granth, which is a collection of hymns. Most important, however, is that Gobind Singh was the last and final guru. He declared the end of guru succession for the Sikh community and ushered the religion into a new leadership model that centered on the text of the Adi Granth. He declared that the Adi Granth was the "living guru" - hence, it is often called "Guru Granth" instead of Adi Granth.

Gobind Singh created a new form of Sikh community called the Khalsa, which is a spiritual community of soldier/saints who will stand up and, if necessary, fight for justice. Click the link below to learn more about the khalsa.

In general, the ten gurus of Sikhism and the subsequent change in leadership and organization illustrate what happens as religions grow over the centuries. Religions are living, organic things that shift and change with time. Older forms of thought, practice, structure and organization give way to newer forms. This example in Sikhism is a perfect illustration of this universal phenomenon in religion.