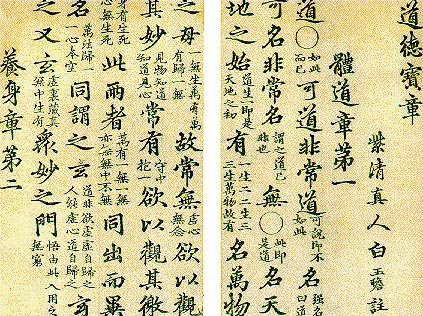 The Tao Te Ching is the foundational text of Taoist philosophy and religion. Tradition attributes it to Lao tzu, the founder of Taoism, who lived in the 6th century BCE. However, most scholars today trace its writing to as late as the 4th or even 3rd century BCE.

The title translated means "The Book of the Way and its Power." It is a short book, only containing about 5000 words of text. It is divided into 81 chapters that resemble poems or short prose pieces more than full-blown book chapters in the conventional, modern sense. It can easily be read by most readers in just an hour or two; however, like most sacred texts, it may take a lifetime to really understand the ideas.

The Tao Te Ching expresses the major themes in Taoism (discussed more fully in the links below) which include:

Two common symbols in Taoism are evoked as well: water and the willow tree. Water is the softest of all things, yet is able to cut deeply into rock hard surfaces. Water, thus, illustrates the paradoxical nature and the power of the Tao. Willow trees are large and imposing trees whose strength lies not in their brittleness but in their yielding nature. Because they are flexible, they are not destroyed by high winds.

Thus, both water and the willow tree symbolize the strength to be found in softness and pliability, a central theme in Taoism.

Who is Lao tzu?
Yin and Yang
Wu Wei and Ziran
The Tao, or the Way
Who is Chuang tzu?