Who is Lao tzu? 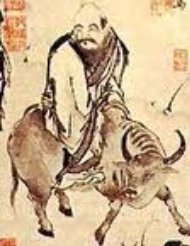 Lao tzu is widely considered to be the founder of Taoism. Some scholars suggest that he may not have actually existed historically - that he is a legend or mythical figure only - but many scholars of religion hold to the idea that he is, in fact, a historical figure.

Not much is known about him. He is widely credited with being the author of the most important text in Taoism - the Tao Te Ching - although this is hard to prove historically. He lived during the 6th century BCE, in the same period as Confucius. One of only two recorded stories about him tells of Confucius coming to visit to him to get advice. He advised Confucius to give up his government job and his entire way of living.

A second story captures the "essence" or spirit of this religion's founder as he is understood and embraced by Taoists. This is a popular story in Chinese culture and often appears in religious artwork. According to the legend, Lao tzu became frustrated with the wrongheadedness of people in China, especially the leaders, so he vowed to leave. He rode across the desert on a water buffalo and reached the border crossing. The border guard recognized him as a sage and pleaded with him not to leave China. Lao tzu insisted he was leaving. The guard convinced him to at least write down his ideas before he left, so that future generations could benefit from them. He finally agreed to this and, a day or two later, returned to border crossing with a small sheaf of papers on which he'd written his ideas, which he handed to the guard. The sage crossed the border out of China and disappeared forever. The sheaf of papers eventually became the Tao Te Ching, the most important book in Taoism.

This legend captures the simplicity and humility of Taoism and its founder, whether or not he actually lived historically. He did not ride in a fancy carriage or on a majestic horse; instead, he rode a common work animal. He had no concerns for leaving a "legacy" or for bolstering his reputation as a sage, and had to be convinced to even write his ideas down for others to see. This type of non-attachment, simplicity and humility are at the heart of Taoist philosophy.

The Tao Te Ching
Yin and Yang
Wu Wei & Ziran
The Tao, or the Way
Who is Chuang tzu?