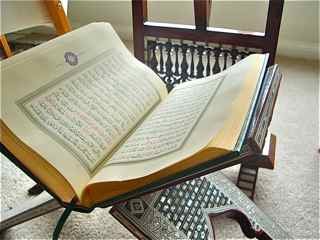 The Quran is the primary sacred text of Islam, and is made up of the recorded revelations that Muhammad received over a 20-year period that he share with his close associates. The word "qur'an" in Arabic means "recitation" which, in this case, is a reference to Muhammad's experience of reciting from memory the revelations as he received them from God via the angel Gabriel, and also his act of reciting them to his close associates not long after receiving them.

The Quran is understood by Muslims everywhere to be the literal words of God in Arabic. This is significantly different view of the sacred text than that of the other Abrahamic faiths. While Judaism and Christianity certainly revere their respective texts as divinely inspired, very few among them (although there are a few) believe them to be literally, word for word, the actual words of God. But, this is what the Quran is for Muslims - the actual words of God as they came to Muhammad in Arabic.

For this reason, Muslims give the highest regard to the authority of the Quran and its "miraculous" nature. Moreover, as Islam has spread throughout the world, it has never put much energy into translating the it into local languages. It wasn't translated into English, for example, until the period of British colonization and it was done at the initiative of those who wished to read the it in English in order to discredit it. For Muslims, the words of God came in Arabic - period. If we wish to hear and read them, we must learn Arabic. Muslims all over the world chant, recite and pray sections of the Quran in Arabic even if it is not their language and they cannot speak it otherwise. The Arabic language enjoys a lofty prominence in Islamic culture because it is the language of the sacred text. 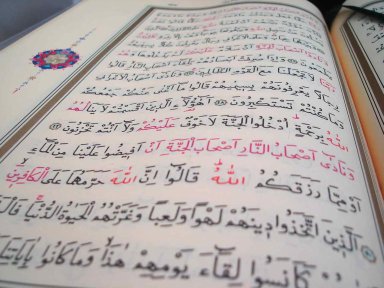 Like many world sacred texts, the Quran underwent a period of textual and oral transmission before it was finally collected into a definitive edition in the 7th century. This transmission period, however, was not as long as other texts in the Abrahamic tradition, and portions of the material that makes up the text were already being recorded in written form and made into private collections during Muhammad's lifetime. In other words, the formative history of the the text is coterminus with Muhammad's life.

Therefore, the Quran is a text with a high level of integrity with regard to the religion's founder and origins, in that the text is not several decades, generations or centuries removed from the lifetime of the founder - as is the case in both Judaism and Christianity. Within 20 years of Muhammad's death, a standardized version of the text came into existence that became finalized within another 20 years. The New Testament, by comparison, was not "settled" until the late 3rd century and into the 4th century - a few centuries after Jesus' death - although the texts that make up the New Testament were written within the first generation after his death.

Most scholars divine the Quran into the "Meccan" and the "Medinan" revelations - that is, those that came to Muhammad while the community lived in those 2 different cities. About two-thirds of the text were revealed during the Meccan period, which was during the spiritually formative first 13 years of the community. These revelations are short, apocalyptic (pointing to and predicting the end of the world), and very dramatic in tone. The Medinan revelations reflect a different phase of the community and are more focused on statehood, community-building, juristic and worldly matters, and cover the last 10 years of Muhammad's life.

- stories of the prophets - 37 prophets, mostly from the Jewish and Christian heritage, are listed - others are from historical or local Arab prophets deemed to have taught monotheism

- praise of God - especially acknowledgment that there is only one God

- community building - the Muslims left the urban, commercial area of Mecca and moved to Medina and had to adjust to its agricultural ethos - community tensions emerged

- ordinances - laws and rules - not a full blown law code, but general guidelines about inheritance, divorce and other domestic and community issues -

- jihad - the word means "exertion" or "struggle" - in the Quran, jihad is mostly an armed struggle in defense of Muslims

- personal life of Muhammad - several allusions to his life, particularly is doubts, issues with his wives, and his leadership

The Quran is at the very center of Islam. The religion makes no sense without it. It is the common feature that links all Muslims worldwide. 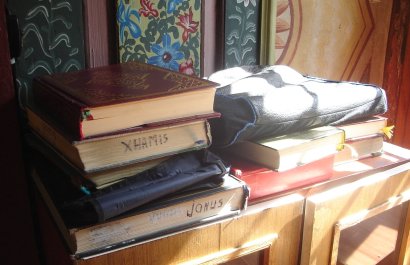 The Hadith is an important, but secondary text in Islam. The term means "traditions" and refers to the traditions of Muhammad as he lived his life among the first Muslims. Many stories are told of him as he went about his daily affairs, interacting with people, leading the community, and managing his household. The Hadith provides the image of Muhammad that is the role model for Muslims everywhere. Together, the Quran and the Hadith provide the textual foundations for what later becomes the vast body of Islamic jurisprudence known as sharia law, or "divine law".

A distinct feature of the Hadith is the method of verification used for the stories of Muhammad's life. Each story or episode is preceded by a list of names that identify the individuals who passed down the story, all the way back to the person who observed the events of the story first-hand. In this way, the authenticity and veracity of the story is upheld.

A contention within Islam is that the prior Abrahamic religions did not guard sufficiently the revelation contained in their scriptures. Therefore, passages of the revelation, stories of the Hebrew prophets and of Jesus are corrupted. We cannot be sure the stories reflect what really happened since their authorship is unknown, as is their path of transmission down through the mouths and pens of people who followed Jesus and the early disciples.

Islam understands itself to have improved on this process in its handling of the revelations received by Muhammad and the traditions he exemplified in his life. Both the Quran and the Hadith are respected as texts with a great deal of integrity and authenticity in terms of communicating the divine revelation and the traditions of their prophet for the centuries.