Arabic calligraphy is the most prominent art form in Islamic culture, mostly due to the prominence of the Quran. Calligraphers had a higher status than painters well into the 14th century. Some esteemed calligraphers were called "prophets" and even tell of receiving their script or technique in visions. For example, Tabrizi (died 1346) claimed to have received the nastaliq script in a dreamlike vision of the prophet's cousin and 4th caliph Ali. 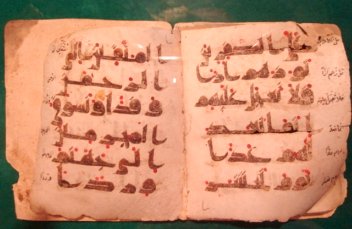 One of the most famous calligraphers in Islamic history was Ibn Muqla who lived in Baghdad in the late 9th-early 10th centuries. His gift as an artist was likened to the inspiration of bees as they build the cells in their beehive. Ibn Muqla set out the initial principles of proportionally perfect script by developing them according to how many rhomboids (the design of the pen nib on the paper) fit on the Arabic letter alif (English letter "a"). He set up what are called the "Six Pens" of Ibn Muqla which include the 6 scripts of riqa, muhaqqaq, raayan, naski, thuluth, and tumar.

Arabic calligraphy in an Islamic context appears in many scripts and forms. The earliest form of calligraphy is called kufic. It has a blocky appearance and is very legible. The early Qurans were written in this script. As time passed calligraphy became more decorative and varied. Other most commonly used scripts are the thuluth, naski and nastaliq. These more cursive scripts are found in books and on the inscriptions of religious architecture.

Many more scripts have been developed along with decorative abstract designs for certain passages of the Quran, chapter and verse markings, headings, bindings, frontspieces, marginal ornamentation, and ornamental versions of vocalizations, diacritical marks and vowels in Arabic.

The image below shows the 4 developing layers of Arabic script.

The first line shows only the basic shapes of the letters.

The second line illustrates the added diacritical dots on some letters which require it.

The third line adds the vocalization marks for pronunciation.

The fourth line shows a decorated sentence where ornamental elements are added.

Arabic calligraphy is one of three main features of Muslim art. In addition to calligraphy, Muslim art also routinely includes intricate geometric patterns and a variety of vegetal motifs (also called the "arabesque"). 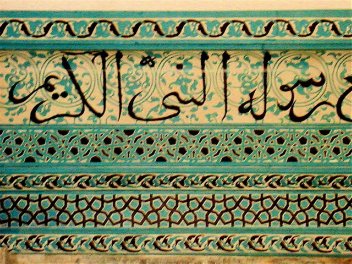 These three together - Arabic calligraphy, geometric patterns, and the
vegetal motif - provide the basic building blocks for an extensive history and collection of Muslim art which appears in architecture, book copying and binding, tapestries, glassware, ceramics, metalwork, woodwork and the entire range of decorative arts.

Moreover, Islamic art is iconoclastic, especially in the mosque and other religious spaces - that is, there is no art that contains the human figure.