"Jihad" means "exertion" or "struggle" and has two primary meanings within Islam.

The first and earliest use of this term in Islam refers to armed struggle in warfare. This is a regulated form of warfare that has spiritual meaning. The Quran includes sections that concern themselves a great deal with this concept. These sections were written from the revelations that came to Muhammad during the Medinan period - the time after the community left Mecca and moved to Medina. Armed struggle in these sections is warfare in defense of the community.

The warfare or battles in early Islam can be divided into a few groups:

- Five Thematic Battles - these are battles Muhammad and the early community waged to return to their hometown of Mecca. They resulted in Muhammad coming into control of all the inhabited areas of the Arabian peninsula. Many Bedouins converted to Islam, but after Muhammad's death reverted back to their prior religions, resulting in additional battles with Muslims.


- Great Islamic Conquests from approx. 634-743 CE - these battles take place after Muhammad's death. During these battles, Muslims conquered much of Syria, Egypt, Iran, Iraq, N. Africa, Spain, Italy and Central Asia. Much of this area became Arabic speaking after being Greek or Aramaic speaking. Although Muslims conquered these areas politically, they did not force religious conversions in most instances. Instead, the political conquest set the pre-conditions for the conversion, which sometimes happened centuries later.


- Crusades in 1095-1291 CE - Islamic forces fought Christian armies led by the Catholic Church and the Popes.


- Second Wave of Muslim Conquests - 14th-19th century - initiated by the Turks and others - resulted in the Ottoman Empire throughout Anatolia, Central Asia, the Balkans and parts of Europe - also the Mughul Empire in the Indian subcontinent. 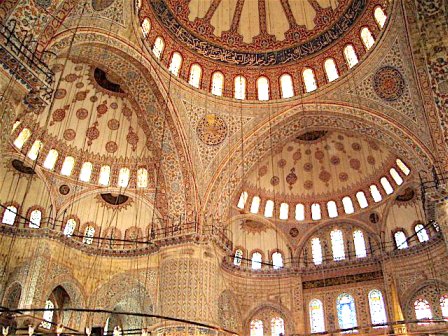 A second form of jihad develops after the first century of Islam's history. It is a more spiritualized form - the "inner struggle" or the "jihad of the heart." Sufis and others promoted this form of struggle as opposed to the militarized or armed version. They referred to the inner jihad as the "greater jihad" and the armed form as the "lesser jihad."

These two forms of jihad have co-existed and co-mingled with each other for most of Islam's history. They often have served to inform and balance each other in various social and political contexts.