Jen and li are central concepts in Confucian ethics and form the first two of what are commonly called the "Five Constant Virtues" of Confucianism. Confucian philosophy emphasizes the role of moral development in determining who is fit to govern and lead society. As such, it focuses not only on adherence to rules and principles, but also the proper cultivation of moral character in all who would be governors.

Jen (pronounced "ren") is translated into English as "humanity" or "humaneness." It is the highest Confucian principle. People cultivated by it are humane individuals who exhibit benevolence and care toward others. They are motivated by a deep empathy for others - what might be called "human-heartedness."

According to Confucius, all people have the capacity to be people of jen or humaneness mainly because all people are intrinsically good. This is a fundamental assumption of the Confucian worldview - that all people are inherently good and, thus, capable of operating in a way that is empathetic, humane and full of care for others. When people are not educated or developed properly, this intrinsic quality breaks down - people become hateful, rash, uncaring, undisciplined - and chaos comes into life at every level.

Through cultivation of jen - of the capacity for empathy, humaneness, deep humanity - a truly "superior" human being emerges. Confucianism gives the term junzi to such superior human beings - a truly perfected person. Junzi are not perfect in the sense that they never make mistakes, but in the sense that their moral character is true, their intentions are pure, and their actions are disciplined and aligned with that moral character. 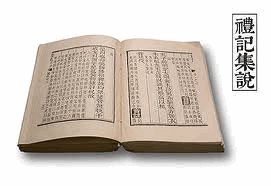 The Book of Rites, one of the Confucian Classics

Li is a companion virtue to jen in many respects - the other side of the same coin, so to speak. It is translated as "ritual" "propriety" or "etiquette." It is this dimension of Confucian philosophy and ethics that makes it "religious" more than anything else - the element of ritual.

Confucius was a conservative - he believed in tradition and in conserving and respecting tradition. Therefore, respect for rituals, traditional practices and conventional mores became important in his thought for restoring and maintaining order in society. And these rituals extend throughout all of life - the imperial palace, the marketplace, and the home.

Li is the mechanism by which all of life is ritualized and declared "sacred" in a sense. Through it, life is properly ordered and harmony is established. Although the concept of li existed in ancient ritualized ancestor worship in a limited and narrowly religious form, Confucius broadened it to apply to all activities in life so that all of life takes on the air of religiousness or seriousness. Bowing in greeting to someone, wearing certain colors of clothing on certain days, behaving in certain ways around those older than you, observing proper manners at a meal or meeting, and so much more - all these are examples of li in everyday life.

"To master and control the self and return to li, that is jen."

Together, these two virtues create a highly cultivated and disciplined person who behaves properly in every situation and who is motivated by deep care and empathy for people. This person is the junzi, or superior person, mentioned above. They control their actions, impulses and desires in accordance with the demands of li and jen. As such, they exhibit a strong sense of personal power - called te in Confucianism - that compels people to follow their example.

This exceptional quality, combined with other knowledge and skill, makes them the ideal people to create and govern a harmonious society. For this reason, the entire corpus of Confucian teaching, texts and traditions in focused on the cultivation of moral character in people who have the intellectual capacity to learn the things necessary for government. Intellectual capacity alone for leaders and governors is not sufficient; moral character must accompany it, otherwise these governors and leaders will drive society into lawlessness and chaos.

Who is Confucius?
The Tao, or the Way
Yin & Yang
Xiao, or Filial Piety
I Ching & The Analects
Who is Mencius?