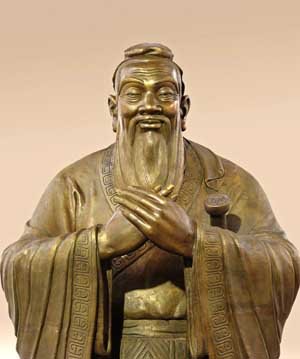 Confucius is perhaps the most influential of Chinese philosophers. His ideas about creating social and political harmony through good governance, proper human relations and individual moral development shape Chinese thought and history for many centuries.

Very little is known about his life, and most scholars attribute some of what is passed down as "known" to legend. He was born in the mid-6th century BCE in the state of Lu during the waning years of the Zhou dynasty. His name was Kong Qui, and was called Master Kong by his students. The name "Confucius" is a Latinized version of his name given to him by Western scholars.

He held low-level government positions and sought for a high-ranking ruler to hire him as an advisor so that his ideas for achieving social and political harmony could be implemented. This never happened. So, he spent the rest of his life studying the classics of Chinese history and teaching his ideas to students.

Some of these teachings are found in an important text called The Analects, although others besides him contributed to this book as well. He is also credited by the tradition with authorship of the Five Classics of Confucianism, but most scholars do not find enough evidence to justify this claim.

He died in 479 BCE without having had any major influence on China during his lifetime; however, his teachings developed in the centuries after his death and came to prominence during the Han Dynasty, when they enjoyed imperial patronage. After another long period of dormancy, neo-Confucianism emerged in the 10th century and came to shape Chinese understandings of social and political life well into the 20th century.

No other philosopher rivals him in terms of long-term influence in Chinese religion and history.

The Tao, or the Way
Yin and Yang
Jen & Li - Confucian Virtues
Xiao, or Filial Piety
I Ching & The Analects
Who is Mencius?