I Ching & The Analects 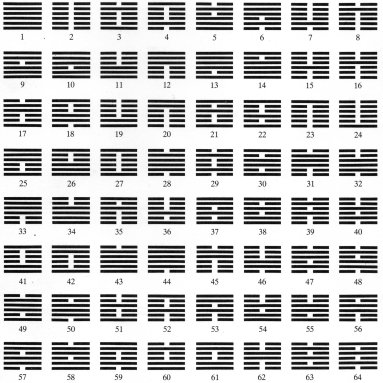 Image from the Shift of the Age blog - click to visit

The I Ching and The Analects of Confucius are two of the most important and well-known texts in Confucianism. Other texts include the Six Confucian Classics and texts attributed to Confucian philosophers who lived long after Confucius died. However, none of them have the wider popularity of these two.

The I Ching - translated as the Book of Changes, or the Oracle of Changes - contains material that dates to pre-Confucian times. It focuses on the ancient practice of divination - a way of determining or making decisions about the future. It is comprised of 64 hexagrams, which consist of 6 lines - either solid or broken - arranged in certain configurations. The solid lines are Yang; the broken lines are Yin. (Click the "Yin & Yang" page below to learn more.) The hexagrams present the dynamism or "nature" of a particular situation in the life of the person consulting the oracle, and offer advice about it in a symbolic and enigmatic way that must be interpreted by the person.

The Analects is a text that is often attributed to Confucius himself; however, very little evidence exists to support this claim. Most scholars claim that The Analects are a collection of the teachings that emerged from the time in Confucius' life when he studied the classics and discussed them with his students. They were collected and written down long after Confucius' life.

The Analects are mostly short conversations, discussions or even aphoristic sayings that relate to the central themes of Confucian philosophy. The sections are relatively easy to read, which contributes to their popularity and wide appeal.

Who is Confucius?
The Tao, or the Way
Yin and Yang
Jen & Li - Confucian Virtues
Xiao, or Filial Piety
Who is Mencius?