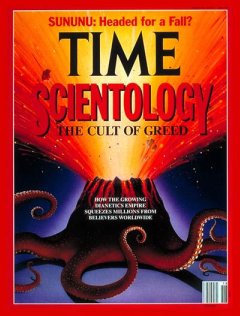 1. L. Ron Hubbard - many people question the sincerity and/or honesty of the founder of the religion. It is now well documented that the official biography of his life as told by the Church of Scientology contains factual errors about his university education and academic credentials, his naval service, and other details. For example, the claims made about his naval achievements blatantly contradict the official records on file with the U.S. Navy. Moreover, some question whether or not the religion of Scientology is nothing more than simply a manifestation of his skill as a science fiction writer, self-promoter and entrepreneur.

2. the financial costs of Scientology practices - the auditing process costs hundreds of dollars initially and progresses higher into the thousands as one moves "up the bridge" to the highest levels of awareness and teaching. Critics see this as a mechanism for wealth more than a means of helping people achieve spiritual freedom.

3. the secrecy of the religion - as mentioned on the Scientology belief page of this website, adherents of this religion do not speak about Scientology other than to offer direct quotes from Hubbard. This is standard church policy. Therefore, much of what goes on within the religion is secret or "behind closed doors" which arouses suspicion. As time passes and the religion grows, however, it becomes ever harder for the Church to keep its practices and beliefs completely secluded, or free from outside scrutiny. Many of its internal documents have been leaked to the public through Wikileaks and other sources.

4. the authoritarian structure of the religion - the Church actively seeks out for legal prosecution those whom it believes are spreading its teachings and/or practices without authorization. It safeguards the copyrights and intellectual property of Hubbard's ideas and strictly controls not only access to them, but also their interpretation and application in the religious life of adherents. Additionally, some who have left the Church report experiencing harassment, intimidation and even kidnapping at the hands of Church officials. Due to this, a break-off group of free scientologists have started an alternative spiritual tradition that adheres to what it calls the true and authentic teachings of Hubbard without the controlling and authoritarian structure of the Church of Scientology.

Scientology is an interesting case study in the founding, growth and development of a new religion. Struggles with scriptural interpretations, founding intentions, organizational leadership and succession, and control of the larger religion as it grows are all part of the developmental history of world religions. Most of them struggle with schisms, mistakes and other problems as they develop from being personality-driven movements to being full-blown institutions with global scope. This religion, having only been a religion for little more than 20 years, is clearly in this phase of development. Scientology controversy most likely will continue to be part of the religion's history for a while.

Do you have photos of churches, temples, mosques or other sacred spaces in your photo collection? Share them with us!

Don't let your great photos sit on your hard drive gathering digital dust. Put them to work by sharing them!

Create your own webpages on this site using your photos of sacred spaces from around the world. You can share your favorite shots as well as the stories that accompany them.

Your photos can help fulfill the informational mission of this website by helping others to see the beauty and richness of the world's great religions.