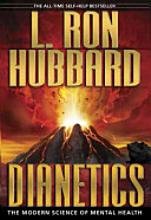 Dianetics: The Modern Science of Mental Health is perhaps L. Ron Hubbard's most famous book. Many consider its publication in 1950 to be the beginning of the Church of Scientology.

Before writing this book, Hubbard had a successful career as a popular writer who specialized in the genres of science fiction, fantasy, westerns and adventure genres. His turn toward the philosophical and religious topics came first in 1938 with an unpublished manuscript entitled "Excalibur", which discussed the survival urge in human life and how an intangible quality of human life called the "X-factor" can organize and influence the material world.

In Dianetics, Hubbard lays out the ideas that ground the basic worldview of Scientology. Specifically, he explains the two types of "mind" in human beings: the reactive mind and the analytic mind.

The reactive mind contains impressions, or mental images, of all manner of feelings, experiences, and even traumas from all stages of its history, including pre-natal periods and even time periods in past lives. These images form the mental "box" or prison from which and in which a person lives and experiences the world. Moreover, they are at the root of most anxieties, illnesses and other problems people experience in life.

The analytic mind, however, exists separately from the reactive mind, and can begin to unlock anxieties, illnesses, etc. and dig deep into the past experiences or traumas that lie at their root. Through proper training and knowledge - and specifically through a process called "auditing" - people can discharge these experiences from their minds and free themselves from the prison of the reactive mind.

(Click the Scientology Belief link below to learn more about Hubbard's theories of the mind and the process of becoming "Clear" through the auditing process.)

Initially, only a few thousand copies of Dianetics were published. It eventually, however, became a New York Times best seller and sold over 20 million copies. With the money from book sales, Hubbard and some of his associates created a number of Dianetics Foundations in several U.S. cities. These foundations were charged with developing the ideas of the mind expressed in the book, as well as the process of auditing for achieving a state of "clear" from the reactive mind. Financial troubles, coupled with criticism of Hubbard's ideas from the scientific community, resulted in the closure of the foundations after a few years.


In the early years after the book's publication, the process of auditing resembled closely what had become known as standard methods within psychotherapy. Some members of the scientific community accused Hubbard and others who facilitated the auditing process of practicing medicine without a license. Moreover, many in the scientific community were not convinced of the legitimacy of Hubbard's claims about the health benefits of the process. Due to these issues, the process of auditing was adapted to not resemble so closely a psychotherapy session, and the health claims of the process were modified somewhat.

Despite these adaptions, however, Dianetics remains a fundamental text of Scientology in that it presents the core view of the human self and its potential for transformation and freedom through a particular "technology" of knowledge.