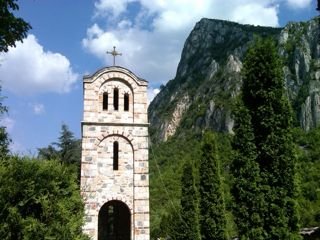 Protestantism, Catholicism and Eastern Orthodoxy are the three major divisions with Christianity.

Like all major world religions, Christianity has existed for many centuries and, therefore, has many different groups within it. Most of these groups agree on the basic tenets of the faith regarding Jesus, the salvation brought by his death, the oneness of God, the existence of heaven and hell, and a few other central claims. They differ, however, on several important points - enough to actually break away from each other and form new expressions of the faith.

Since the Protestant Reformation of the 16th century in Europe, hundreds of groups within Christianity have been formed. Organizing them all into 3 main groups - Protestants, Catholics and Eastern Orthodox - simplifies this and helps us get the big picture of the diversity within Christianity.

The chart below explains these 3 main "faces" of the Christian religion. Following the chart is an explanation of the sections of the chart. 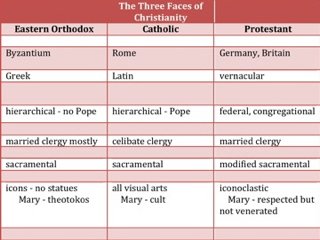 Eastern Orthodoxy and Catholicism are the two oldest forms of organized Christianity. They began in two different regions of the Roman Empire - the Eastern and the Western. The eastern part was known as Byzantium and largely used the Greek language, whereas the western part was centered in Rome and used the Latin language.

Protestantism - which includes Lutherans, Presbyterians, Methodists, Baptists, Congregationalists and dozens of others - begins to develop in the 15th and 16th centuries in Europe, mostly in Germany and in Britain where the languages were German and English or other vernacular languages.

Therefore, the origins of these 3 faces of the faith help explain their linguistic, geographic and cultural differences. Many Protestant hymns are written in German. Catholic Mass is said in Latin. One of the largest groups within Eastern Orthodoxy is the Greek Orthodox. And so on . . .

The 3 groups have very different institutional organization. Eastern Orthodoxy and Catholicism are organized hierarchically - in a pyramid of sorts - and are lead from top to bottom. At the bottom are priests, above them are bishops, and other offices are above them on up the pyramid until the top. Both these forms came into existence during a period of political empire that was itself organized hierarchically, so they emulate this form within themselves.

Where they differ from each other is in the topmost position. Eastern Orthodoxy has a system of Patriarchs who govern the church at the highest levels, and they are mostly situated within certain geographic regions or jurisdictions - such as the Greek Orthodox, Syrian Orthodox or Russian Orthodox and so on.

Catholicism gives ultimate leadership to the bishop of Rome - called the Pope. The Catholic church is headed by this single individual. This is a major point of difference between these two forms of Christianity, and it was part of the reason for their split with each other in 1052 CE.

Protestantism, in sharp contrast, developed during a period of transition away from hierarchical government toward representative or democratic government. Therefore, it emulates this form within itself by having a more congregational or federal structure that gives more power to the individual congregations to determine their own leadership, and to participate in the larger decisions of the denomination (i.e. Lutheran, Presbyterian, Baptist, etc.).

Marriage rules for clergy differ among the 3 main groups. Eastern Orthodoxy allows many of its clergy to marry, especially in the lower ranks of priests. Certain restrictions on marriage begin to apply as priests move up the ranks. Catholic priests, bishops, etc. must remain celibate and are not allowed to marry. Protestant ministers are allowed to marry.

Eastern Orthodoxy and Catholicism are both sacramental in a way that most Protestant churches are not. This has to do with the theological meaning and importance of certain rituals practiced in these churches. A "sacrament" is a visible form of grace. The sacraments in a Christian church are rituals that, in themselves, are a window through which the worshipper directly encounters God. The famous "seven sacraments" include baptism, eucharist, marriage, ordination, confirmation, confession, and last rites. Both Eastern Orthodoxy and Catholicism affirm these sacraments (with a few distinctions). The sacramental nature of these rituals means that they are vital for salvation and that only priests may perform them; therefore, membership in the church is vital for the Christian life. There is no access to the sacraments (or salvation) without the church and its priests.

Protestantism views things differently on the whole. Some denominations take a sacramental approach to baptism and to eucharist (sometimes called communion) ; others avoid the "priestly" connotations of the sacraments altogether. They view some of these rituals as important, but they see them as merely symbolic or commemorative of Christ, God, etc. Salvation does not come through these rituals, they say, but through God's grace and faith in Christ. The rituals are not necessary for salvation. Therefore, for example, Catholics will conduct the Mass, or eucharist, every week while Protestants may conduct a eucharist or "communion" ritual once a month or even once a quarter.

Finally, these 3 groups differ on the role of art - especially paintings and statues of human figures. Eastern Orthodoxy allows figural paintings in their churches and worship but not statues. Catholicism allows both figural statues and paintings. Protestants, for the most part, allow neither and, therefore, are iconoclastic (meaning "no icons"). Furthermore, only the Eastern Orthodox and the Catholic revere Mary, the mother of Jesus, in their worship - the Protestants do not. So, for example, you will see statues of Jesus, Mary and others in Catholic churches, but only paintings of them in Eastern Orthodox churches. You will see neither in Protestant churches. Sometimes, in a fellowship hall or maybe in the baptistry some Protestants churches might allow a picture of Jesus; however, this is rare. Moreover, as a general rule, no reverence of Mary will appear in art or in any other part of their worship.

These major differences between the 3 groups in Christianity help explain why some members of these groups don't even recognize each other as a form of Christianity. They are so different from each other in styles of worship, expression of faith, and practice - so different that they "feel" like totally different religions to some people even though they are simply different forms of the same religion.

Who is Jesus Christ?
Who is Paul of Tarsus?
Gnosticism in Christianity