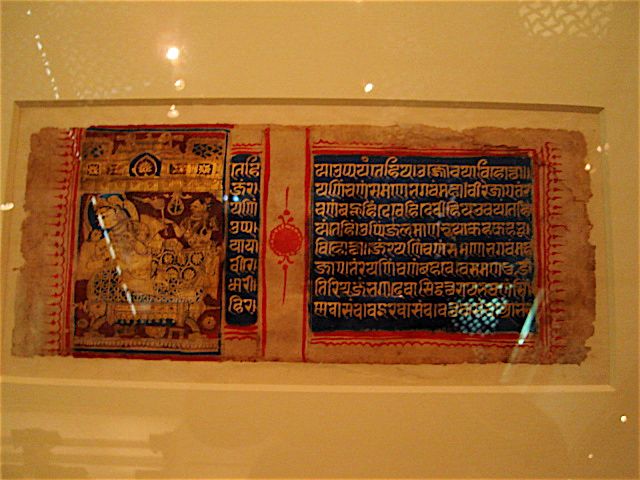 Mahavira is the founder of Jainism. He lived during the same time as the historical Buddha in the 6th century BCE. This era was characterized by a shift in Indian religion away from Vedic ritualism and worship of the gods, and the rise of the merchant class.

He was born in near modern-day Bihar to a chieftan and his wife. One tradition says he was a lifelong bachelor, another says he married and had a daughter.

At 28 yrs old, on the death of his parents, he renounced family life and became a mendicant (similar to a monk) in the tradition of the famous ascetic Parsvavnatha, who was born in 872 BCE in what is now the city of Banares.

Parsvavnatha (or simply Lord Parsva) was married to the daughter of a king, but was not interested in the court, so he renounced it at age 30 and began a life of austerity. He wandered through India, gathered disciples, and lived according to 4 vows: don’t kill, steal, lie or own property. According to tradition, he finally achieved moksha on a hill in Bengal which is revered by Jains today.

So – in the tradition of Parsva, Mahavira renounced family life as well. Stories from the Jain tradition say he tore his hair out in 5 handfuls, took off his clothes, donned the monk’s robe, and later even went naked for a period of time. For 12 years he led this austere life of meditation and asceticism until finally at about age 40 he became a “jain” - a victor over his body and his passions – and he achieved enlightenment. He began to preach, teach, and to convert many to the Jain way of life. He organized the monks, nuns, and laypeople. He entered nirvana at age 72 in small town not far from his birthplace.

Let’s plug this story of Mahavira's life into Jain beliefs about historical cosmology:

Jains see the universe as eternal and uncreated – there is no creator deity or being. Temporal spans are vast and cyclical – the universe passes through infinite numbers of cosmic cycles, each divided into 2 alternate periods of ascent and decline. During these phases there is a gradual rise and fall of human civilization.

Jains see Mahavira as a tirthankara (or teerthankar). According to them, he is last one of these figures in the present age or cosmic cycle. From a scholarly perspective, most of the 24 tirthankaras in the current cycle are legendary, but the last few can be traced as historical figures.

So, that's who Mahavira is. He is depicted in Jain painting and statuary as mostly naked, sitting in the meditation position. The spiritual themes associated with his life are extreme commitment and austerity. He is revered for his life's renunciation of regular life in favor of the rigorous spiritual path of meditation and ascetic practice.