There are two main divisions or groups in Jainism - the Digambara and the Svetambara. Here's the background story that explains their origins. 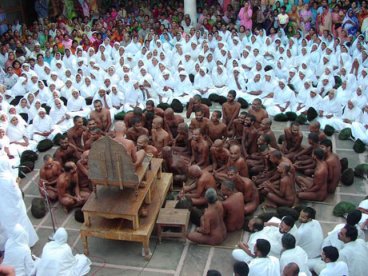 According to tradition, some of the Jain community moved at the direction of their political leaders to the south to avoid a predicted famine. Others stayed behind in the north. After about a dozen years or so, those who migrated south came back and found that their brethren who had stayed in the north had become lax in their practice of austerity, even wearing white robes. This was inadmissible, in their view, for a Jain monk since to renounce meant to renounce all attachments and bindings, including the emotion of shame at ones nakedness from having no possessions - not even clothes.

So, a schism occurred and they split into 2 sects:

- Svetambara (or Shvetambara) – the “white clad” – they wear the white robes

The 2 sects have drifted away from each other and are active in different parts of India. The “sky clad” have reduced numbers of monks, due to the rigor of the order, and are made up mainly of householders.

The white-clad are quite sizeable in their monastic communities. A “Reformation” of sorts occurred in their group in the 1653 CE when a reform movement called Sthanakavasis (“dwellers in the halls”) condemned what had become the practice of worshipping at the Jain shrines by decorating the statues of “jinas” (i.e. Mahavira) with silk and jewels. The reform movement condemned all forms of iconolatry and temple worship as inconsistent with the teachings of Mahavira.

This schism between the “white clad” and the “sky clad” has no real impact on what are believed to be the central teachings of Mahavira. The basic teachings remain consistent across the 2 groups.