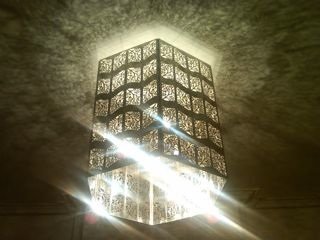 Kabbalah is a term that refers to Jewish mysticism. Judaism has produced many different forms of mysticism that range from deep theoretical speculation to purely emotional experience, or from esoteric secrecy to folk piety. All forms of Jewish mysticism consistently appeal to scriptural authority, yet no mystical movement ever strayed further from theological orthodoxy that some forms of kabbalah.

One of the early forms of Jewish mysticism is called creation mysticism, which focused on the mysterious methods God used to create the world. It describes the creation of the world through the arrangement of particular letters and numbers. A key text in creation mysticism is Sefer Yetzirah "The Book of Creation" from the 2nd cent CE. A key word here is sefirot, which means "enumeration" and refers to the 10 attributes/emanations of God arranged in a distinct schema that demonstrate the mechanism through which God revealed and continues to reveal itself via creation as well as in the metaphysical realm.

This concept of the sefirot becomes prominent in Kabalah, which is the most famous form of Jewish mysticism. It flowered in 13th century Spain with the writing of a text called the Zohar (meaning "Radiance" or "Splendor") which is a commentary on the Torah. God is known as Ein Sof and cannot be comprehended by humans but can be known and approached and revealed in the 10 attributes or sefirot. Key figures in the early history and development of the most common branch of kabbalah are Moses de Leon and Moses Cardoveros.

Another branch of centers around Abraham Abulafia (13th cent), and combines Aristotelian philosophy via Maimonides with mystical speculation of the divine names. It involves meditation on the Hebrew letters of names as abstract forms, which gives access to an experience of primal unity. Through this meditation, the soul unties the knots that keep it in the world and multiplicity.

Finally, another form is from 16th century advanced by Isaac Luria and is an intricate creation theology whereby creation originates via a process of self-emptying. In this creation process, God withdraws or contracts from a mystical space within himself to "make room" for creation or establish a possibility for a reality other than his own omniscient being. When God extends again from the contraction, there is a shattering of vessels and a scattering of divine sparks everywhere. Throughout the creation, then, are sparks of divine life.

Hasidism arises in the 18th cent in Poland as a revivalist folk movement. It is more emotional than intellectual, honors charismatic leaders more than rabbis, and emphasizes a joyful spirit and moral living. Hasidism centers around the claim that all people can have an experiential connection with God and can involve themselves with tikkun ha-olam "repairing the world" or recovering the sparks. Hasidism is sometimes called "kaballah for the people" not just the elite.

New Age religion has absorbed certain aspects of kabbalah and even produced its own versions of this form of Jewish mysticism. Indeed, many forms of kabbalah exist today in the West. More truly "Jewish" versions are pitched as a renewal movement within the faith, targeted to non-traditional Jews. The mystical notion of tikkun ha-olam permeates contemporary Judaism, and many see mystical versions of the faith as the best way to keep vitality and energy in the religion.

Other versions of new age kabbalah are controversial because of their syncretism (incorporation of magic, tarot cards, aromatherapy, etc.). They move beyond Judaism into the mishmash of appropriated traditions in "new age" religion.